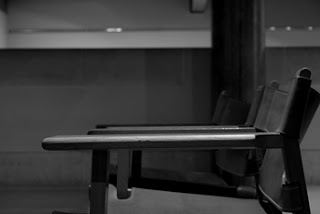 Woody Allen is credited with having said that eighty percent of success is showing up. There are times when showing up isn’t all that important; you know, those things where you think, “meh, maybe I’ll go, maybe I won’t.” Then there are times when it’s super-important, like for your wedding or heart surgery. Also when you’re on trial for sexual assault. That’s an important time to show up.

But, a defendant is allowed to not show up for trial if he or she wants. Our rules of criminal procedure specifically say that defendants have to show, but that there is a procedure for waiving appearance. There are also times when appearance is impliedly waived.

Mr. Stanley was charged with sexual assault. The facts are not especially sympathetic here. The victim in the case was his own biological adult daughter. When she was a child she was adopted by a different family after having been placed in foster care. When she grew up she reconnected with Mr. Stanley and came to Vermont to visit him. One night she, her boyfriend, and he stayed up late talking. Eventually she fell asleep on the couch and awoke to Mr. Stanley sexually molesting her. She was understandably freaked out and went and sat in the bathroom, trying to figure out what to do. The next day she dropped off Mr. Stanley at a store and reported the incident to the police. She said she waited until the next day because she was scared.

Mr. Stanley wanted a trial in his case, so that’s how it proceeded. He didn’t always want to be transported from the jail to court for hearings, so before the trial started, the State filed a motion asking that he either commit to showing up, or waive his appearance. He came to that hearing, and the court determined that he was going to show up for future proceedings.

Jury selection was next. The sheriffs transported him to court, and he participated in the hearing.

The first day of trial was a week or so later. He was transported to court, but refused to come into the court room. He was apparently acting out—punching walls, and making threats. The judge held a hearing about the issue. One of the transporting sheriffs testified about Mr. Stanley’s actions, and also that Mr. Stanley said he was going to attack his lawyer physically. The judge and the parties then talked at length about how Mr. Stanley could participate, given the safety issues that had presented themselves. The judge made a written order, setting forth her decision that Mr. Stanley had effectively waived his right to be present, but that she’d let him watch by closed-circuit television from another part of the building, and that she’d let his lawyer go see him very frequently during the trial.

The sheriffs gave a copy of the written order to Mr. Stanley, who threw it on the ground, and then said he wanted to be present. The judge was worried about everybody’s safety, especially since Mr. Stanley said he was going to attack his lawyer. The judge said Mr. Stanley’s lawyer could go talk to him during a break, but that they were starting the trial. The lawyer met with him at lunch and an afternoon break, and both times he said he didn’t want to come in. On day two of the trial, Mr. Stanley was again transported and decided not to come into the court room.

The judge gave the jury an instruction that they could not hold against Mr. Stanley that he was not present in the courtroom. The jury deliberated and found him guilty.

Mr. Stanley’s sentencing hearing was held at some point later. Mr. Stanley didn’t attend that hearing, saying that he had been switched to new medication, and wasn’t sure if he’d be able to keep it together during a hearing. The judge went forward over the defense lawyer’s objection.

Here are Mr. Stanley’s issues. First, he says that he didn’t waive his appearance at trial, and the judge shouldn’t have gone forward without him.

SCOV says sorry not sorry, but that’s not how it goes. SCOV looks at Vermont’s rule on waiver of appearance, and because personal appearance is a constitutional right, reviews it de novo. A waiver can be implied if someone deliberately doesn’t attend the proceedings. SCOV says that here Mr. Stanley was in the building, he was making threats and was being violent, and had lots of opportunities to come in if he wanted. But he didn’t come in, so there’s the waiver. As for not attending sentencing, SCOV points out that the hearing had plenty of notice, and that he could have filed a motion to continue to let his medication situation even itself out. But he didn’t, so it was proper for the hearing to go forward.

Second, the court allowed testimony about a prior very bad act to show the victim’s state of mind. When the victim was younger, she saw Mr. Stanley—her dad—stab her mother in the head with a butcher knife. She said she waited until the next day to report her dad’s behavior because she was afraid of him, and that she was afraid of him after having seen what he did to her mom.

This is probably really prejudicial. But the State didn’t offer to it to show that he’s an all-around bad guy or that he acted in conformity with his prior violent tendencies. They offered it to show why the victim waited and her state of mind. SCOV says this was ok because there were sufficient limiting instructions given to the jury about this, and the defendant didn’t object to the instructions at the time.

Finally, Mr. Stanley also faced a habitual-offender enhancement. It’s Vermont’s version of the “three strikes” rule. A person with 3 or more prior felony convictions can face an enhanced sentence of greater than the statutory maximum and up to life in prison upon conviction of an additional felony. That sentence is cumbersome, and I’m sorry.

SCOV says that this was actually ok. The reason is that the habitual offender enhancement is just that —enhancement of a sentence—and not a whole new charge. If it was a new crime, then there might be a different issue, but since it’s not, this is permissible.
Posted by Andrew Delaney at 12:52 PM